Philip and Shelly Jauch have been married for over 25 years and have four children. Their karate journey began when their second son turned 10 and they wanted to find something to help build his confidence and self-discipline and something Philip could do for exercise. A friend recommended karate as something they could do together and IBBA as a great place with friendly staff and focus on character education. “We loved the fact that the curriculum was not about fighting, but about doing your best to stop a fight and focusing on your character to always choose ‘right over might’”. Philip made great friendships and found a passion for martial arts while finding a healthy physical program, their son made connections with others and worked hard to earn his Jr. Black Belt, and eventually their daughter and 3rd son joined as well! “My favorite moment as a karate mom was cheering on my daughter and husband working to earn their Jr. Black Belt and 2nd Degree Black Belt together.” While their children have chosen to pursue other activities, the lessons they learned from karate still benefit them in many areas of their life. Philip’s passion and commitment have led him to become a school owner and study many other forms of martial arts as he continues his journey as a student. Shelly has partnered with Philip as school owner and desires to see the school continue to provide quality martial arts and character education to students of all ages.

Philip Jauch holds the rank of Sensei and 4th degree Black Belt in International Kenpo Karate Jiu Jitsu under Professor Robert Austin, Sensei and a 3rd degree Black Belt in Shorinji Tetsuken Do Kanda Ha Kamishin Ryu under Soke Don Phillip, a Basic Instructor Certification and rank in Progressive Arnis under Chad Bailey and ongoing studies in BJJ and Wu style Taiji. He believes in supporting the journey of every student to improve themselves. He works diligently to provide a well-rounded education to his students as he trains to improve his own abilities to the same end. “I work with some of the best instructors in the industry within our school. It’s an honor to watch the students progress and grow.”

Mr. B has been training at International Black Belt Academy for 16 years. He has earned a 3rd degree black belt in International Kenpo Karate Jiu Jitsu under Professor Robert Austin, a 1st degree Black Belt in Shorinji Tetsuken Do Kanda Ha Kamishin Ryu under Soke Don Phillip, and is now a full-time instructor and the Operations Manager for our school. He is committed to teaching health and wellness as well as moral values and personal growth and development through martial arts training. “Being able to change lives and help people is what this program is all about,” he says. “I am proud to be a part of a place with such wonderful staff and students.” 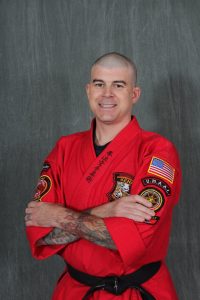 Sensei Lee Urton is a lifelong Martial Artist, father of three, and veteran of the Iraq war who has been teaching at Kaizen IBBA for over a decade. He spent his childhood training in traditional Karate schools, and in his teenage years transitioned into western boxing before joining the Marine Corps in 2000. While a Marine, Sensei Urton served as an infantry team leader and received numerous awards and commendations for his service in combat during the 2003 invasion of Iraq. Since his military service, Sensei Urton has attended CSU’s Health and Exercise Science program, as well as devoted his life to teaching and empowering people of all ages (particularly children) to live healthier, happier, and more active lives through Martial Arts, inspiring all his students to live up to their potential. As a father of three, Sensei Urton understands the value of Martial Arts in young people’s lives and the enormous positive impact it has on both physical and emotional health and he has made it his mission to share the Martial Arts with as many people as possible. 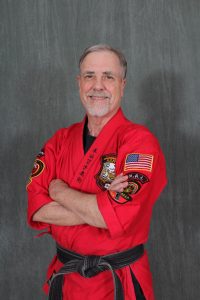 Mr. Drew (Dougal) has been a martial artist for the better part of his life. As a child he studied Judo and Jiu-Jitsu every summer. As a teen, he studied southern styles of Chinese boxing (Kung Fu) as well as some more Jiu-Jitsu. Mr. Drew served in the Army in the early 80s, and was certified for 2 years of training which included working as a cadre sergeant, helping to facilitate close quarter drills in ROTC Army Ranger club.
Dougal came to work for IBBA in 2006 after 2 years of training as a Kenpo student under Mr. Austin. Mr. Drew worked as an instructor at IBBA from 2006 to 2010. In the following 5 years, Dougal had the opportunity to teach many students martial arts and self-defense in courses at the local community colleges. In addition, he has engaged in self-study in Wing Chun and Chin Na principles. 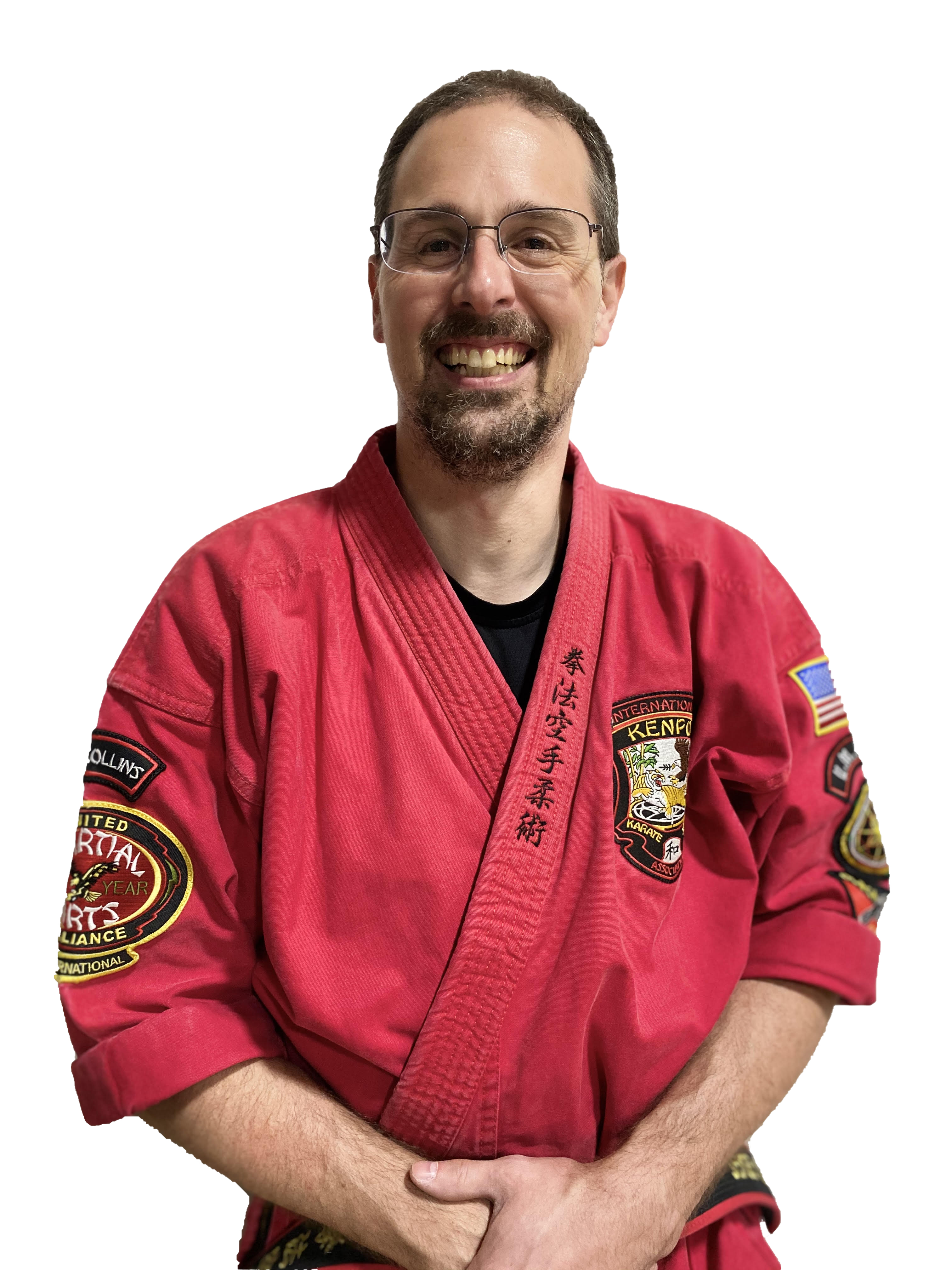 Mike Klusman is currently a 3rd degree Black Belt instructor. He began training in Kenpo over 10 years ago in the Loveland IBBA school where he earned his Shodan Rank under Sensei Keith Schuett while working as an assistant instructor. He recently earned his Sensei license. His teaching emphasis is on truly understanding and embracing the principles and tenants of International Kenpo Karate JiuJitsu.

Jamie Chou has been training at International Black Belt Academy since 2015 and earned his 1st degree Black Belt in August 2018. Back in Reno, NV he was training towards his green belt in Goju Kenpo before going on hiatus due to an injury. When his kids became old enough, the Chou family found a home at IBBA Fort Collins. While continuing his training as a student, Mr. Chou was the first student to complete the instructor certification program. “I love martial arts and I value making a positive difference in someone’s life. As an instructor I am privileged and honored to do both.”

Kierra has been training at Kaizen IBBA since November 2012. She began her journey after enrolling her son in the program and seeing how much fun he had while he learned new life skills. Kierra earned her 1st degree Black Belt with her husband in February 2017 and their 2nd Degree Black Belts in February 2018; they are both currently pursuing their 3rd Degree Black Belts. She enjoys teaching with the level 2 & 3 Panther classes and hopes to move to teaching adults as well. She believes that martial arts have something for everyone and the most important things she has gained from her training are self-confidence and her “Ohana”. 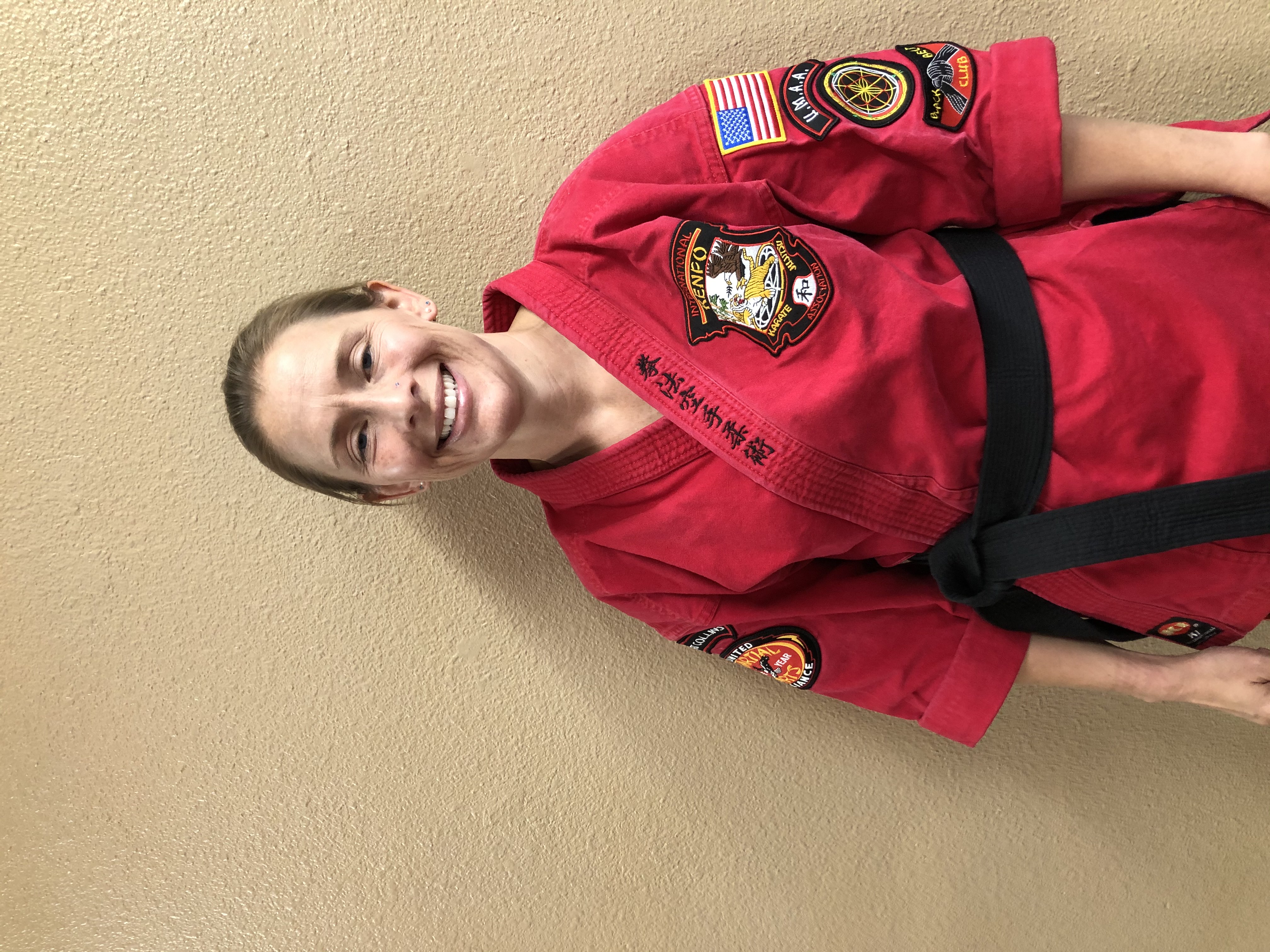 Sarah Reichert has been studying and practicing at Kaizen IBBA for the last six years. She is currently working towards her 2nd Degree Black Belt. She participates and practices with Kaizen’s FMA Stick Fighting Team and has been trained as a Tier I Instructor through the school’s program. International Kenpo/Ju Jitsu has been a challenging and rewarding part of her life and she looks forward to expanding her knowledge of both the art and the best methods to pass on its legacy through teaching.

Sarah is a certified Early Childhood Education teacher, published novelist, and poet. She volunteers her time as a writing mentor through workshops and conferences as well as manages a blog about writing. She’s a mom of two girls and, in her limited free time, she enjoys hiking, writing, practicing yoga, and spending time with her kids. 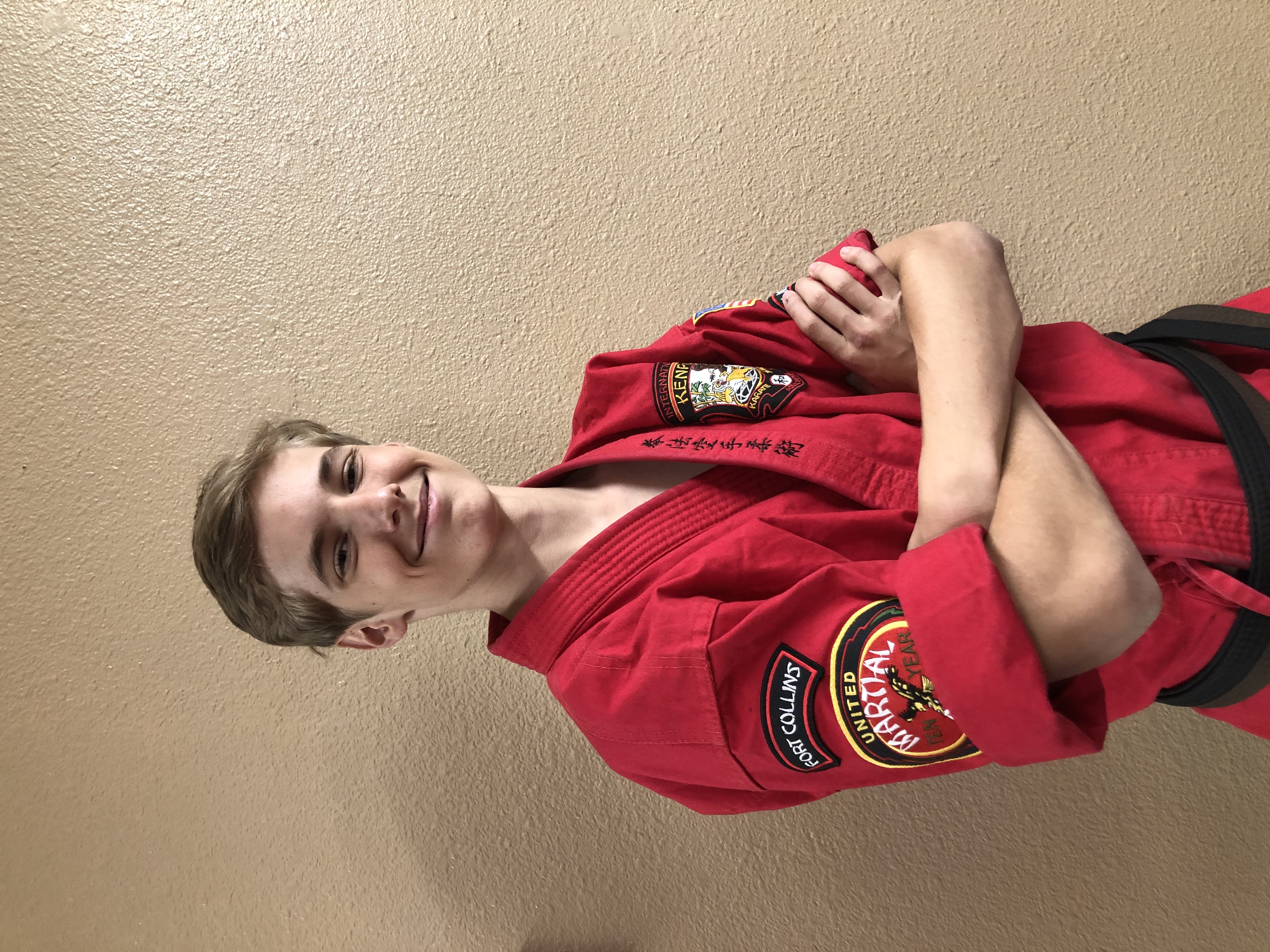 Ben Botero started training with his siblings when he was 6 years old. As he worked through the ranks, he struggled with the determination to continue at Jr Black, but his family encouraged him to persevere. He is now working toward his 1st Degree and plans to continue his training to become a Sensei.
Mr. Botero completed the Tier 1 Instructor Training in September 2019 and is an amazing instructor with our Little Dragons and Tigers.

Lauren started working at IBBA in the office in February of 2014 while finishing her English degree at CSU. She worked as a First Impression Specialist until August of 2018 when she left to pursue a career teaching 6th grade Language Arts for two years. She returned sporadically to help out but officially came back as the Program Director in July 2020. “I loved my time working at KIBBA and missed the connections I made during my time here. After I had my daughter in October 2019, I knew I wanted to return. KIBBA always felt like home, and I’m thrilled to be back with my Ohana!